The French have their macarons and crepe suzette and Italians have tiramisu and cannoli, but as the saying goes, there are few things more American than apple pie. Today pie offerings in the US are as diverse as the country itself, with restaurants serving more creative fillings and using local accents and ingredients to make some bakers’ creations particularly notable. Here are some of the top spots in the US to try delicious pies  with innovative new flavors, as well as good old American pie classics.

Try: Petal & Pretzel pie
As a restaurant that bills itself as promoting “regional American cookery” and “timeless family recipes,” it’s little wonder that pie is one of this Santa Monica supper club’s claims to fame. Perhaps best known for its rose-petal variety, Birdie G’s other options run the gamut from classic to creative.

Try: Boston Cream Pie
The Boston Cream Pie, which was first served in 1856 at the historic stately Omni Parker House, is one of the state’s most iconic foods. But these modern times call for the extreme — and extremely delicious — pies from South Boston’s Sweet Tooth Boston. Baker and owner Glenn Quirion, whose architecturally sound cakes have landed him on Food Network’s “Cake Wars”, whips up an astonishing array of pies, like apple, blueberry, peach, banana cream and his mother’s butterscotch cream.

Try: Orange bourbon pecan pie
Darcy Schein and Leslie Coale-Mossman are two friends who started Pie Junkie in 2010 as a hobby, and haven't looked back since. The menu features over a dozen selections, including edgy orange bourbon pecan and peanut butter chocolate. Seasonal varieties are always a popular choice, but the Oklahoma City bakers’ claim to fame is their cultishly popular Drunken Turtle, which features a graham cracker crust filled with fudgy chocolate, topped-off with bourbon-spiked caramel and pecans. Many flavors are also offered frozen so you can bake it at home.

Try: Strawberry mascarpone pie with lemon curd and a gingersnap crust
The concept at Blue Sky Bakery & Café is as sweet as its deserts. The business is a nonprofit that works for social change in Chicago by employing homeless and at-risk youth to help them transition into the workforce. Mini pies are a highlight here. Try the option piled with fresh fruit or dark chocolate pecan.

Try: Chocolate chip cookie pie
When President Obama visited the Providence outpost of this old-timey-themed restaurant/bakery in 2014, he endorsed the Death By Chocolate cake, a six-layer indulgence. But he would have done equally well with their beloved apple pie, which requires five pounds of apples from upstate New York for each. Other knockouts include coconut custard, chocolate chip cookie, and frozen strawberry yogurt. There are four Gregg’s locations throughout the Ocean State.

Try: Key Lime Pie
While it’s a thrill to walk into a bakery and have to choose from an embarrassment of delicious riches, there’s something very noble to be said about the baker whose committed his career to specializing in one thing.  Steve Tarpin of Steve’s Authentic Key Lime Pies is a practitioner with a single focus.

He started turning out the pies over three decades ago in Florida, ground zero for key lime pies, and to this day it’s the fresh-squeezed lime juice that gives his creations — which are available in 8-inch, 4-inch, and the “teaser” size 3-inch — their authentic zing. Well, that and the crust, a proprietary blend of graham crumbs. The flagship bakery is a waterfront spot in Red Hook, Brooklyn, but you can find his pies at many retailers, including Whole Foods, around NYC.

Try: Chocolate haupia cream pie
Little surprise that Hawaii’s most intriguing pies employ tropical fruit. At Ted’s Bakery, locals return over and over for the chocolate haupia cream pie. Haupia, a creamy coconut pudding, is the star of this decadent treat that also features dark chocolate custard and frothy whipped cream. Other locally-minded options include strawberry guava cream pie and strawberry haupia cream pie. This bakery-café sits on Oahu’s north shore, but Ted’s pies are never far away wherever you are on the island. They’re sold at markets, supermarkets and convenient stores.

Try: Apple pie a la mode
Everything is bigger in Texas and the menu at this characteristically small-town eatery is no exception. Locals come to the Texan Café and Pie Shop for the chicken-fried steak, catfish, and burgers and stay for the many, many pies. Traditional options like chocolate fudge and fluffy peanut butter occupy the menu alongside edgier flavors, like peppermint patty. There are other enticing specials, like pumpkin praline, but the signature is apple pie a la mode, which is presented in a warm cast-iron skillet. Pie Happy Hour, a Hutton ritual, runs Tuesday through Saturday from 3 to 5 pm.

Try: Black Bottom Pie
Set in a historic mansion built in 1827, GainesRidge Dinner Club serves no-frills American fare like ribeye and seafood casserole. Its most popular dessert, however, has a little more bling. The from-scratch Black Bottom Pie, made from the owner’s mother’s recipe, occupies a spot on the state tourism department’s list of Alabama: 'Dishes to Eat Before You Die'. One taste of it— a layered construction of chocolate and bourbon-spiked custard in a gingersnap crust crowned with fluffy whipped cream — and you’ll understand their claim.

You might also like:
Celebrate National Cake Day with these classic treats
Ultimate eats: the world's top 10 food experiences for 2022
10 legendary US restaurants that come with a side of history 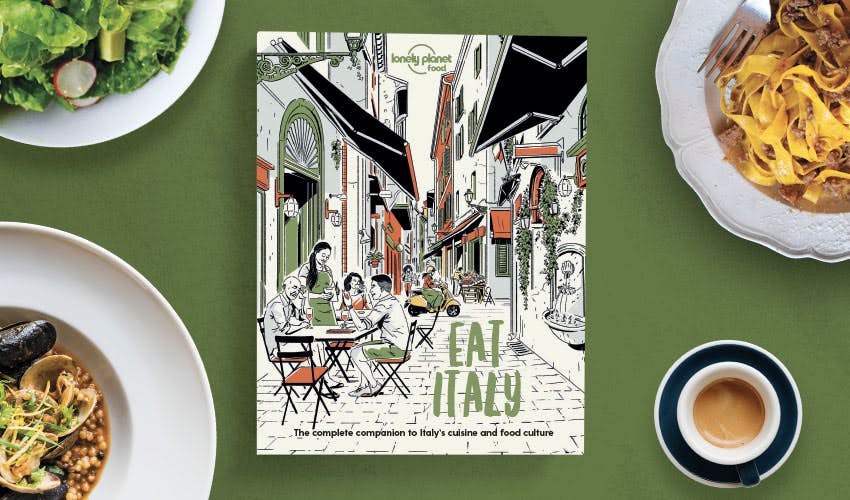 To help you feel prepared for the Italian food scene we'll cover how, when and where to eat, etiquette dos and don'ts, and what classic regional specialties are a must try. You'll find the best places to eat in every region as well as what to order when you're there and how to eat it.